Some routines are very hard to break. When we first moved in, the winter was on our heels and even though we enjoyed good weather for a long time, the mornings were dark and we were tired from the stresses of the move. We got into the habit of taking a cup of tea back to bed, to sip in the darkness until the sky eventually lightened.
Through the winter, I struggled with the fibro and T would make the tea and bring it up to me. It's been a lovely routine but with the start of the bright mornings it seems a little indolent to lie in bed while the animals are all busy outside.
So I've made some small changes. I get up early, put the kettle on to boil then let the chickens out and top up their food bowl. Next I give Jerry and Toffee a pack of haylage (Toffee has been ill again and Jerry is still so thin so they're in a paddock together) and then I divide another pack of haylage between the other ponies. We've stopped buying hay as it just gets wasted, next year we should have enough grass!  By this time the kettle is boiled and I let the tea brew while I feed the cats, they just have a tin and a big bowl of biscuits between them as too much meat encourages the flies. Then, the tea is taking up to bed where I do some research and blogging on my laptop and T goes through his French lessons. It's still a relaxed start to the day, but doesn't feel like a waste of time.

Today the sun is high in a gorgeous sky and I have mulching to do and then wool to clean, so I won't be hanging around too long :D 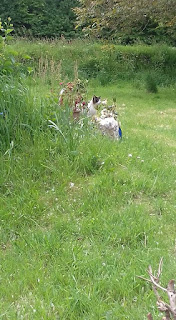 This is number 8 cat, he thinks he's moving in with us, but I don't think we need any more! Dexter agrees with me. 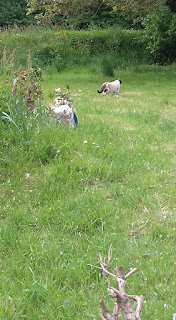 Unfortunately, no.8 has formed an attachment to Gigi and she seems quite happy with that, so he's often skulking around the place. He has lovely blue eyes and is quite sweet, but we don't need another mouth to feed!