Back to hats.
Last year I did very well making and selling Witch Hats on the Studio blog. While I was making them, I had lots of requests for different designs.  I was only just setting out at the time and trying to find my own style.  My stealth witch hat was inspired by Terry Pratchetts 'Hat Full of Sky' and was very popular, but making other styles took a little longer to work out.
Now though, I'm happy to present the Bewitched Hat, named for the style of hat worn by Nicole Kidman in the movie of the same name.  Now my hat is of course my design, so no copyright issues there, but I will be making more in a similar style. I like the big floppy brims and this one could be a little bigger.
We did try to recreate the original film image, but the candles were dangerous, I looked like I'd had a night on the tiles and Moomin couldn't stop laughing long enough to take any decent pictures (she's my chief photographer!), so I had to settle for my hat model! I think she could do with a name as the clothes model is called Maude! Ah, maybe, Hattie, haha! 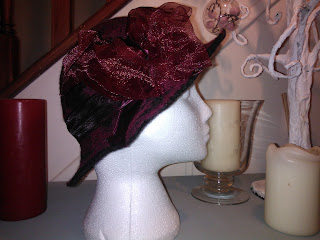 The ribbon needs a little taming, I think! 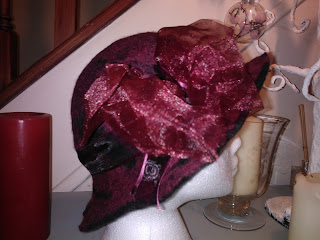 Here is a sneak preview of the Snow Queen wrist warmers.  The Polwarth is sooo soft, good enough for a cat to try to steal! The blue is Merino with some lovely blue silk that was a sample from one of my wool suppliers.  It's a very happy colour for a dull day. 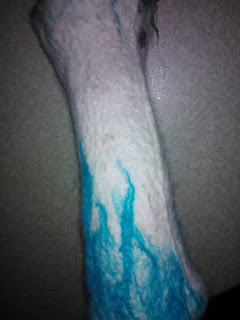 But of course the evening belongs to cats, warm drinks and The Supernatural Box set. Fae and I love those Winchester boys, although to be honest, I think she just likes to know that I'll be sat still long enough for her to steal cuddles. I think we have another 5 seasons to go before we catch up with the latest episodes!!! 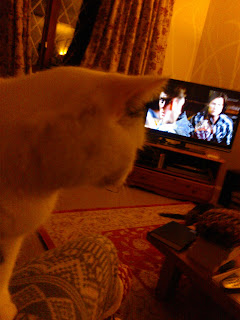 The Polwarth saga continues. I passed it through the drum carder and it began to show promise of turning out ok after all. 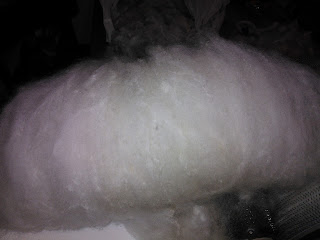 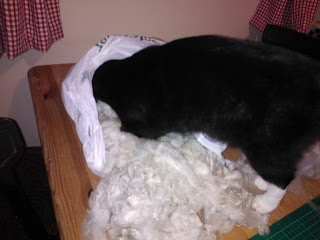 The wool cabinet was given a French makeover complete with little muslim curtains to hide the chaos inside! I'm very happy with it :D 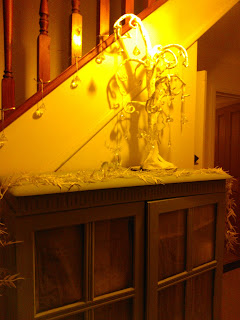 Christmas was bitter sweet for me. I found myself once again alone on my path and maybe the upset of that or  it was the continuous damp weather, but for some reason I found myself in the middle of a Fibro flare. Not much walking happened over the holiday period. My hands and feet have swollen and I found it all a bit much to take.  My lovely children (young adults now) stepped in and saved everything.  We had a wonderful time, even though my planned days of knitting and spinning had to be put on hold.

I did manage to do some wet felting with the Polwarth, thinkings it's softness would redeem the effort of cleaning it, but alas, still some tiny particles of hay and dirt clung to it to mar the finished piece.  I won't give up and the next post will be about a gorgeous corset fit for a Snow Queen :D
Posted by Yarrow at 02:19 No comments: