This, I suppose is just a ramble through my thoughts at the moment. I've been thinking a lot about pets and their impact in our lives. When we lost Walley it was such a huge and sudden shock. He meant so much to all of us people and animals. I'm still grieving in a huge way and not a day goes by without a tear or two or more! I really thought that I could never have another dog but Manchee was so lost without his buddy and adopted brother. He was just so low and unhappy. The house was such a sad place to be.

I've come to the conclusion that there can be no rules and it's not fair for another person to say what's too soon and when the time is right to get another animal (or person in fact if that's the situation). There is no limit to grief and it is absolutely possible to love another while still grieving for the first. This is what I've found to be true for me. 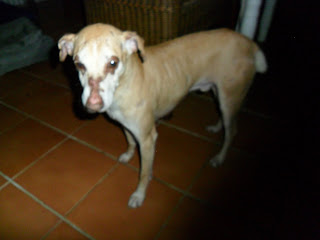 A couple of weeks ago, I saw this sad, skinny and wounded little dog on FB. I scrolled on by but a couple of days later a friend posted his story. His name caught my attention as I'm pretty superstitious about names. He'd been renamed Merlin. My lovely Eriskay is Merlin and we took him under our wing after a dodgy start in life. I read the story about this little chap and a seed began to grow. The following day, I clicked on his picture and re-read the story. I won't go into details but he was horribly wounded and beaten by his previous owners. His face will always bear the scars and so will his ears and what's left of his tail.

I mentioned it to T but he was less than enthusiastic, of course, Walley was his baby. I left it for a while, but the picture popped up on FB and Merlin was to go to an open adoption day. Suddenly I didn't want that to happen. It was a huge surprise to find out that he was in a foster home 15minutes away from us. This is rare as the dogs are featured from all over Brittany. We went to meet him and he hid the entire time. We went back a few days later and took Manchee to see if there was any hope. He attacked Manchee and bit him a couple of times. I was ready to give up, but T suggested one more meeting with the dogs on neutral ground. We went to the woods and Merlin went for Manchee again. Manchee is Mr Mellow in just about all circumstances however, he was ready and turned and growled full in Merlin's face. It was a huge turning point and Merlin suddenly had this whole hero worship thing going on.

So, to fast forward to today, Merlin has been living with us for two weeks! I can't believe he's been here so long!!! His personality has blossomed and he's so eager to please that a simple snap of the fingers will bring him up short. He adores Manchee and has begun to overcome his fear aggression with very quiet but persistant commands.

He and Manchee have suddenly in the last few days really bonded, although Manchee does still do a lot of eye rolling! 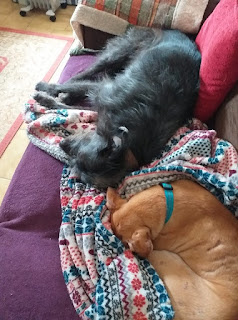 Merlin is probably half Jack Russell and we're convinced the other half is whippet from his body shape and love of blankets :D 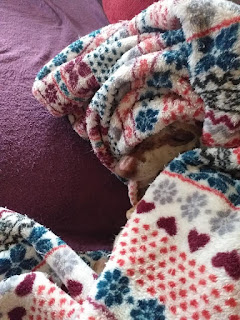 Today they both got matching lurcher/whippet collars embossed with celtic designs. I think that means he's staying. He's certainly cheered up the household a lot. 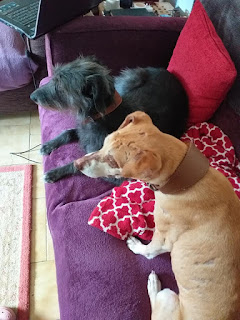 This week in honour of Walley, I had a star added to the top of my Elen tattoo, which I finally had finished. The footsteps and tiny stars are a symbol of the winding path we all take, never fully glimpsing beyond the next turn. 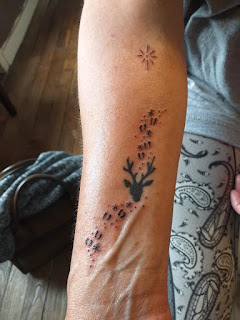 Despite a really bad back, I spent some time tidying and planting Walley's little garden with wildflowers and forget-me-nots. 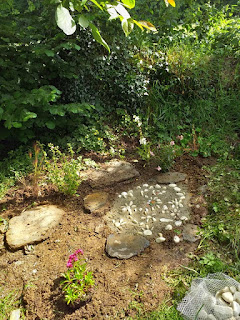 I didn't want a stone marker as it just didn't suit his personality so I inlaid some stones and crystals into cement then decorated the spaces with swirls and a few hearts. It took me forever as I smoothed it all with a small paintbrush. It was worth it though as it's dried out perfectly <3 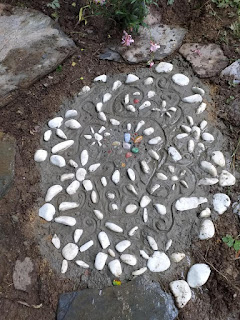