Back to the drawing board.

What would you rather do? Sort laundry or spend the day in weak Autumn sunlight sorting out your garden? Well, of course, any outdoor activity is probably better than sorting laundry, but the air was warm and the sun occassionally peeped out between the clouds and I made my choice. I started laying cardboard for the second bed to go in the Potager. My lovely neighbour came over to ask if he could take some of the manure for his Potager and I gladly agreed. Any help cleaning out the paddocks is welcome. He asked me what I was doing with the cardboard and I tried to explain. There was a long pause and I tried again making hand movements to show the layers of mulch (I need to look up Mulch in French). He looked at me again for a long time, finally, 'Pourquoi'? Why? For the Potager I replied, oh no, he said emphatically! It would seem that the arrangement between the farmer and the previous owners does not extend to the new owners of our house (me). I can graze the ponies on it, but not put anything permanent on the land between the houses. It was an awkward moment for both of us. Could he still have the manure? Of course I said and helped him with a couple of barrows full.

I then had to scout around for another suitable area, which should be easy, but it really isn't! At the back of the house (which is kind of the front as it's on the drive up to the house from the road) is the orchard garden. It's mostly shrubs and edible fruit trees and a lot of lawn.The orchard garden is big enough, but right in the center is the Septic tank and it's runoff. We all agreed that we didn't want our vegetables to be grown there!  So I decided to extend the orchard garden and pinch a bit of the reserve pony paddock. 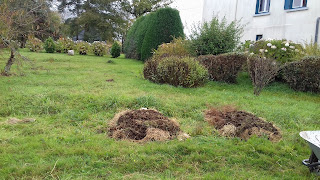 Viewed from the side of the house is the two new beds and the ponies hay under the black plastic cover. To the right of the hay and in the center of the picture is the grassy area fed by the septic tank. It takes up a large area and isn't fit for a great deal. I may let the goats go on it during the summer (when we get the goats!) as I don't know what else to do with it. On the very far right is the driveway up from the road. We planted two of the pear trees there and then dear son broke the shovel! 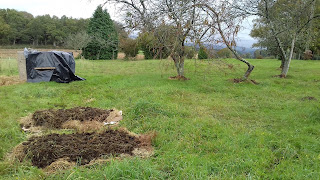 I have some ornamental trees to remove as they're poisonous to animals and people, but I need someone with a chainsaw to cut them back. I only took out a couple of branches with a handsaw and was exhausted! So today wasn't a great success but at least I still have the laundry to look forward to (yuk!) :D

On reflection, I may plant clover and edible wild flowers in the septic tank area to attract bees and pollinators and give the goats a little diversity in their diet. It seems to make sense!
Posted by Yarrow at 07:25