After feeling so great the week before, last week hit me like a ton of bricks! All was going well until a friend arrived to dig out our grey water system and as I helped sort things out, I knew I was pushing myself beyond a reasonable limit.
The friend left and I was left with my perma-garden looking like a battle field, complete with bomb craters and trenches! A long hot bath was needed, but first, the animals had to be fed.

It was still sunny, so I wasn't surprised to see Jerry having a lie down. The others took their places for dinner, but not Jerry! I was instantly alert and called T to give me a hand. Jerry is T's baby and he knew instantly that all was very wrong. He got Jerry to his feet and bless him, Jerry managed to come to me for a cuddle before collapsing again. We pulled him up and T walked him while I called a friend to call the vet. I know I could have managed it myself, if I'd had the time to work out what to say, but I didn't and my mind was shutting down!

We had to abandon the walking as Jerry was in such a bad way that we were worried he would collapse on the road. Luckily, I keep a little paddock seperate for emergencies and we put Jerry there. His buddy Toffee was beside himself with worry and when the vet arrived and began to treat Jerry, I was worried Toffee might have a heart attack he was getting so wild in his agitation.
9 years ago, I lost my wonderful horse Oliver in exactly the same way and he was Toffee's whole world as much as he was mine and I'm sure Toffee knew what was happening.

The vet gave Jerry very strong drugs, including morphine and thankfully, he stopped rolling, which is often the cause of a twisted gut, which is then fatal without surgery.  We sat with Jerry until he fell deeply asleep and then checked on him throughout the night. At midnight we were startled to find him quietly eating a little grass with Toffee nearby watching over the fence.

The next morning, he was well enough to go in with Toffee and eat some soaked hay. Toffee never left his side. 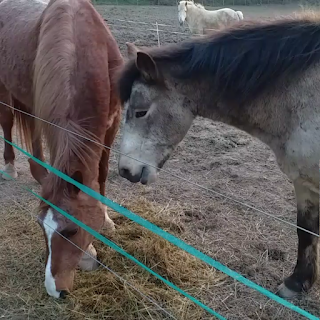 Jerry (on the left) and Toffee.

Of course, after a weekend like that, I wasn't at all surprised to be hit by a big old fibro flare on Monday!!! It was a pretty wasted week!

Glad to be home.

I was so happy to get home to my lovely animals. I'd missed the ponies sooo much and spent a wonderful day in the sun brushing and fussing them. During the winter, Maggie wears her mane in a long plait to stop it turning to dreadlocks. Brushed out it reaches her shoulder <3 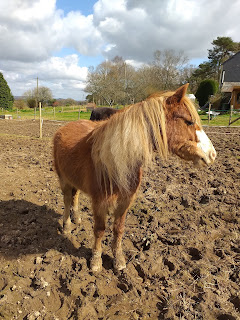 Jerry is looking amazing as well considering that we nearly lost him the first winter due to the stress of the move, the awful weather and the others all stealing his food. Unfortunately Saturday night he went down with a terrible colic, but against all the odds, he pulled through and is now back to his normal cheeky self! 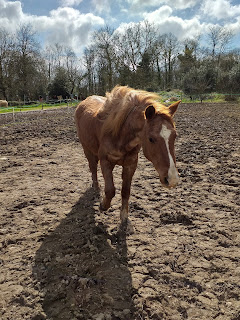 This is what happens when you decide to do some drawing in the house instead of the studio!!! 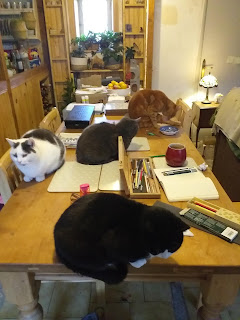 I was playing with ideas for my business logo but got bored and drew a stag! I am so out of practice!!! 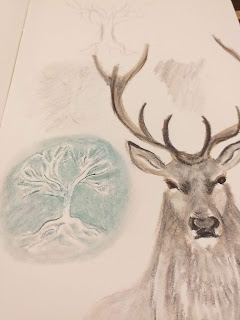 I'll have more to say tomorrow, hopefully. I've overdone it this week and am in bed working on my business plans. I'm so tired that I just want to sleep! The cats think that's a great plan ;)
Posted by Yarrow at 00:11 3 comments: