The opposite of shopping!

It's been a full on busy week here at the Wildewood as we tried to spend every spare moment we could with our family while they were here. I say 'our' family when  really they're T's family who have extended their warmth and affection to me, I feel very lucky <3 My own family are often lacking in the warmth department and it's made me sad on more than one occassion.
However, a good thing happened a few months back. My long estranged Father contacted me through the mighty power of FB! I've been in touch with my half sister for a few years but suddenly I recieved a message from my Dad. It's a small word but has slipped so easily into my vocabulary. Dad. I had a childish pleasure from typing that word into my phone after so many years without a father of any kind. My Stepfather was wonderful and I had a lovely early childhood with him, but when he moved out, we lost touch and he found a new family. Sad but true.
Finally now, I feel connected and I understand why I'm so different to the family I grew up with. Some members enjoyed calling me 'freak' because I refused to fit in with the rest of them and their ideas of how I should live. Now finally it all makes sense. My Dad has always travelled and made his own work, he's been successful at just about everything he turned his mind to and I'm happy to know I've inherited some of his pioneering spirit :D 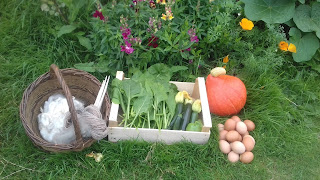 But this isn't a post about family, it's about a lifestyle change. I've learnt so much from my garden, about what grows easily and what is worth a bit of effort, but the biggest lesson has been in how we eat. Before the veggies started to come in, we would decide on meals, make a  list and go to the shops.  Lately though we've been checking the garden first then heading to the store cupboard and building meals around what we have here. Our food bill has halved over the last month. Our conversations often start with 'What do you fancy with spinach tonight?' Or 'Do we have any different courgette recipes?'
So this has saved us money for the summer months, but what if we can extend that further? We need to store our food safely, grow veggies in the poly tunnel so that we have greens all year, maybe even some salads in winter. It's all very exciting and helps me to deal with the black dog of anxiety who still comes creeping around from time to time.
Unfortunately one of my nightmares came true and my tomatoes have developed blight. I'm very disappointed with how they've all failed this year despite my constant attention and efforts. I'm going to pull them out today and make green tomatoe chutney. I was so looking forward to biting into a sun ripened home grown tom! Never mind, some of them ripened in the greenhouse and I don't even remember planting yellow ones, but that's the colour they turned out! The taste was a bit bland too. I hope I'll have better luck next year! 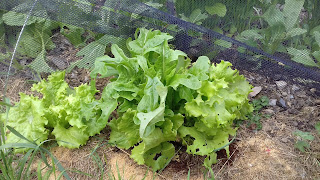 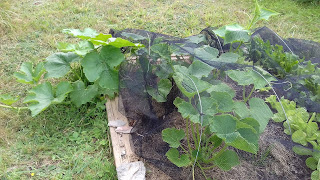 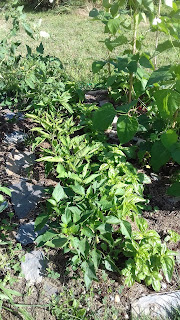 Our successes so far have been with the spinach, a wonderful variety that was just a cheap packet from Wilkinsons. The spinach beet has been good, but no comparison in flavour so I'm letting the beets grow now.
The lettuce has been a big success, especially since I discovered slugs hate coffee grinds and sawdust!
Basil has also been a huge success but coriander either hasn't grown or has bolted right away. I need to find a better place to grow it as it's getting too much sun.
This is the first year I've had success with peppers and they're growing nicely as are the chillis, so I'm looking forward to them.
The beans were a late starter but are swelling nicely now. I grew three varieties but the only survivors have been Gigantes a large soup bean from Italy. I have some small bush beans growing called Cupidon. I planted these a few weeks ago as they're quick growing and I'm experimenting with a fall garden. Fingers crossed.
Also in the fall garden I have radishes, kale, cabbages, bulb fennel, cornichons, herbs and carrots.

I sometimes feel like I'm being pulled in different directions and the essential me gets diluted as I try to hold it together. This isn't a complaint as I only realise it's happened when something snaps me back into place. The weather has begun to drift into cooler mornings and the scent of Autumn creeps up on us as we go about the late night feeding routine. That's when I begin to feel like me again. I start working on wool projects in my mind, plan the next square for my cushions and think about lovely thick blanckets to snuggle under.

Yesterday started cool and damp, but soon the day blossomed into a hot summers day. We had a full on morning of cooking as we prepared to entertain our largest family group yet. Seven of T's family have come over together from the UK and his brother and wife have driven up from La Rochelle to see our house and meet the animals.

I made courgette and sundried tomato soda bread. 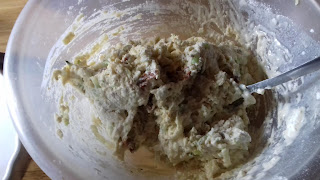 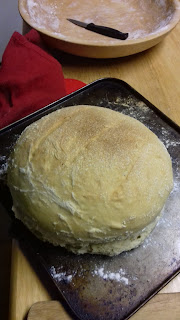 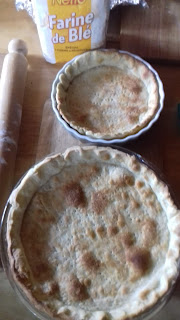 And this is how it all looked put together. I didn't have time for photos as everything came out of the oven because it was like a conveyor belt. Cook it, cool it, cover with tea towels until serving! 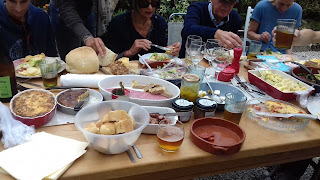 Everyone had a lovely time and I had some lovely compliments on my cooking and even a suggestion that some things would sell well at market. What high praise indeed :D 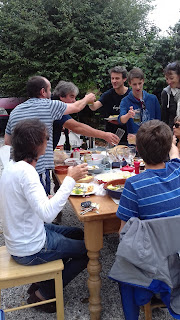 While the adults rested after lunch, T's nephews helped with feeding the horses and they were such willing helpers. It was a lovely day and the first of many :D 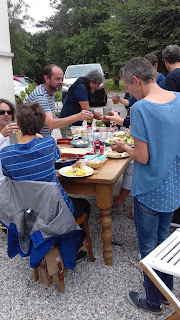 Today I'm planning on some knitting in between feeding horses and pampering my little seedlings, have a lovely one all.x
Posted by Yarrow at 00:26 4 comments:

I think slugs are like the Hydra. You cut one down and ten more appear to take it's place! Most nights around 10.30 I give the ponies their last feed which is a bale of hay spread along the edge of the field. Then I grab a torch and a knife and go slug stabbing.
The big ones are easy, but the tiny white ones are a nightmare. They can decimate a plant en masse but you can't acutally grab or stab them as they're too little. Then, there seems to be a call that goes out to the top field - 'All lower field slugs are no more, move down, move down'! They all march down the pathway from the muck heap to the orchard and the potager - bastards!!! (sorry Leeanna, I had to say it!)
I then stagger, defeated, back to the house where the cats are waiting for second supper! What are they, tiny hobbits???
I'm taking a glass of wine to bed with me now.
Posted by Yarrow at 14:43 3 comments:

Thank you everyone for the lovely comments. I sometimes find that I have to give in, have a good cry and just wallow a bit. A long sleep always helps and I often wake the next day as a new person feeling like I've lost a whole day with almost no recall of it! It's unsettling, but I just have to go with it. There's no pulling myself up by my bootstraps and I'm sure most people who suffer with this problem know that well. You just can't shrug off the burden of depression no matter how hard you try.

When I was first single after 20 years of marriage, I tried to soldier on. I had to prove something to myself. I wanted to be a Superwoman! It's just not possible, I put off the emotions for too long and in the end it's what caused me to develope Fibromyalgia. Sometimes I hate having this condition and sometimes I view it as my body having more sense than my mind. It tells me to stop, take stock and assess how far I'm pushing myself. I also have to be more clever about how I live and work out ways to get the same job done but without making myself ill.

This is why my workload is so varied, I want to do the garden and work with the ponies, but it has to be limited and then I can sit and do painting, spinning or making pendants. I guess this is a holistic approach and it certainly works for me.

A prime example of taking a different view of a problem is what's helping me to deal with Flash, our naughtiest pony.  He's the worst sort of escape artist. I caught him last week with his whole front end through the fences and onto the road! He just doesn't seem to feel the electric from the fence the way the others do! We had to tighten up the wire and reinforce the electric just to find that he'd then ducked under the fence and onto the newly seeded reserve paddock. I've literally been pulling my hair out. He's also very unbalanced and unaware of his feet, he's trampled me more times than all of the others put together! 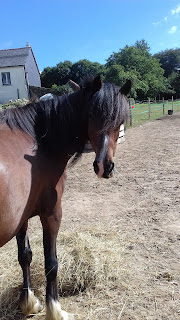 Yesterday I decided to do a little 'in-hand' work to teach Flash about spacial boundaries and where exactly to put his feet when asked. He was so confused at first but I discovered that he loves praise and above all, scratches on his neck. He's a very nervous little soul and was given to T as a companion for Jerry when he was about 2years. Jerry and the others all treated him like the baby and as such, he finds it hard to be on his own but at the same time, he throws his weight around like a spoiled brat. Once he realised I wasn't going to do anything mean he started to listen and react to my instructions. After 10 minutes, he was walking nicely beside me, backing up and moving away from pressure to turn lovely circles. The whole 'lesson' lasted just over 10 minutes as Flash began yawning and closing his eyes. That was all he could take! I then gave him some hay and sorted out the dreadlocks in his mane. I'm looking forward to more work with him today, but if the added attention sorted him out yesterday, it didn't stop him from escaping again early this morning. He was back in the reserved paddock grabbing grass before I could catch him!
Posted by Yarrow at 02:18 3 comments: