Just lately I've been waking as exhausted as if I'd skipped a night and gone straight into another day. I'm just not getting enough rest due to hot sleepless nights (thank you hormones) and worries about how the animals are coping in this rain and mud.
This morning I dragged myself out to feed the ponies and it was such a bright, sunny morning that I was in no hurry to go back inside. I told T that I would be in shortly, but what started as an idea quickly got out of hand. I started digging a little drainage channel so that the area around the hay rack could drain and give the ponies a break from the mud. Two hours later, the area was draining very nicely but so was my energy!
Very rarely does the Fibro show up physically but my hands were like balloons all day and by evening the back of my left hand was purple with a bruise. That was a bit of a warning, I guess, but I still managed 10 rows of knitting! I think it actually helps with the swelling (I'm convincing myself, haha).
Sometimes when I can't knit, I go to Youtube for inspiration or just to learn something new.
This however, I doubt I'll try. I have accidents cooking normally without combining it with knitting, let alone Fair Isle!!!  It's fun to watch though and I love the lady talking with passion about her art. She is sooo fast though!

Have a look and see what you think

Into the Wet and Windy Wildewood!!!

I can't tell you just how wild it's been here lately. The weather has built up until we thought it had peaked and then died down just to build up again. A few nights ago, the house shook with the wind and we had lighnting but no thunder or rain. We've suffered the tail ends of a couple of hurricanes and been almost drowned with incessant rain. The paddocks have flooded and on more than one occassion, almost given in and moved the ponies to their spring pasture. I'm glad I resisted though, as the newly planted grass is so thin and frail, that after only hours we would just have another muddy paddock. 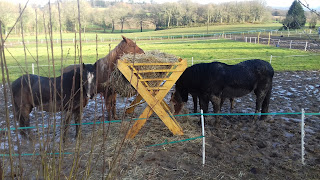 A rare moment of sun. The hayracks have been amazing, but today, this one was broken and the area around it flooded, so the feed was moved to a drier area. The green patch behind the horses is the spring paddock. It looks great, but it couldnt withstand seven lots of hooves in this rain!

So after running outside to feed the ponies in the wind and rain, I came back in to a hot cuppa and a very hot shower. I almost crawled back to bed, but instead settled to some knitting and blogg hopping. I visited my dear friend, Pattypan at Tarragon and Thyme. I've been thinking for some time about yogurt making and I've asked for some cheese making kit for my birthday, so when I read PP's post about yogurt, I accidentally bought myself a yogurt maker (and a little wool!). I'm looking forward to trying some soya recipes that I found online because I can only cope with a little dairy before I get tummy issues (that's all I'm saying). I'm ok with cheese, which is strange, but yogurt is one of the things I really miss. 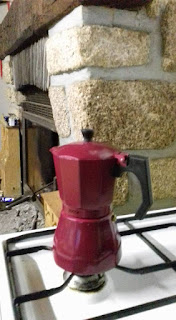 We got really cold and wet doing the second feeds, so I came in and made coffee. This little pot is my Christmas present from T, it's sooo cute <3 I bought him a blue one, which made us laugh as we think the same way often :D 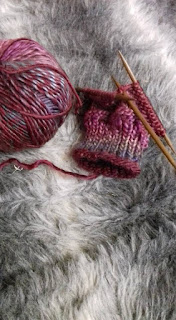 My new gloves are on the needles and they match the coffee pot, haha :D I love this wool. These gloves are for me <3

It's been so wet here all over Christmas that my musles have been suffering big time. Lugging heavy hay nets around and filling the large hay mangers has taken it's toll on my shoulders and hands. I've had so much help, for which I'm very grateful, but all the same it's been tough. Today wasn't so good and I had to go back to bed for a couple of hours, which I hated as I just don't like wasting a day.

I was restless, but couldn't settle to anything, so I went outside to hang out with the ponies and horses. Since arriving here, T's horses have been very wary of me. The journey was stressful and they only respond to T. I've waited patiently and left them to settle down. It's been nearly four months since they arrived and I've barely been able to lay a hand on any of them. 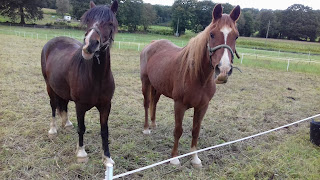 (Jerry on the right and Flash on the left)
I decided that Maggie needed her mane sorted out. In the picture below, she looks lovely, but in the last four months, her mane has become knotted and tangled. Frankly she was a sight! She let me loop a rope around her neck and for half an hour I carefully combed the knots out. She looked beautiful again and asked to be scratched all over her neck. A persistent little nudge on my shoulder told me that Flash was feeling left out. I still couldn't do much with him, but he was close and that was good enough. 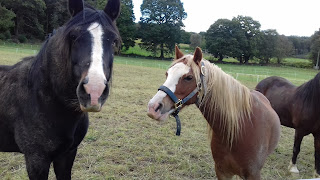 Next horse to push in was Benson. He laid his head over Maggies neck so that I could fuss him without getting too close. I combed his forelock and he was happy. The biggest surprise of all was Jerry. He is T's horse and that's that. Arabs are very loyal to their people and Jerry hasn't spared me a single glance. However, this time, he came right up to me and I carefully lowered the rope to the ground and stood, looking down. He touched my hand and I slowly moved the brush towards him. He sniffed it and let me move it up his neck. I slowly groomed his mane and worked out the knots. As I worked, the weariness left me and I felt a great surge of love for him. He moved closer and I scratched his neck with my fingers. I moved away before him as I wanted him to know that I wouldn't push him. It was a lovely moment.

The next day, the weather was terrible and Jerry and Maggie seemed to be struggling with the cold and wet. I spent a little time with them and resolved to put rugs on them. They've been so stressed since their arrival that rugs seemed a lot to ask.
The following day was warm and bright so I just hung out with the horses and they let me move the rope over their necks. I plaited Maggies mane to stop it from tangling again and then fetched her rug. She ran away, but was soon by my side as I fiddled with the rug in the field. I put a halter on her and with much persuasion, I was able to rub her neck with the rug and finally put it across her back. She loved the attention. Much later, it started to rain and I was glad that I'd taken the time with Maggie as she let me put the rug straight onto her. Jerry was no problem at all! I caught him by accident, I was eating an apple and suddenly his head was in the halter that I'd used for Maggie. Of course it was too small for him, but it didn't matter, I slipped the rug on him, but needed T to help me fasten it as I can't deal with fiddly buckles at the moment.

I'm so glad we did rug the two vulnerable horses (well, pony and horse) as the rain and wind built up to a very wild night, last night and I was able to feel less worried about how they were all coping. My three ponies are fat and have wintered very well, but as Jerry is an arab and Maggie has been stressed they needed the extra protection from their rugs. Soon we hope to build their shelters.

I forgot to say why this post is called 'Jerry', it's beause he made me feel so happy, helped lift me from the doldrums and for a while, reminded me of my dear old Oliver with his gentle, careful manner <3
Posted by Yarrow at 13:54 4 comments: