Well, easy-ish! My lovely man was off early this morning to go and help his Dad mend a roof! I did something I haven't done for a looong time. I took one of my knockout pills and went back to bed. I was quickly joined by the animals and we had a lovely lie in. It's done me a power of good and I'm feeling ready to tackle cleaning some of the fleeces.
I've been looking at the natural dye book again and have found that fruit trees give some lovely colours, so I'll be doing a little pruning (I know it's the wrong time of year!) and gathering some leaves for a series of experiments.
I don't think I've shared these pictures before. This is my lovely little spin dryer. I use it to get the excess water out of my wool. In the past I used the washing machine, but the anti tangle function
could lead to felting the fibres and it's not a risk that I want to take any more. I have too much time and energy invested in my wool for that! 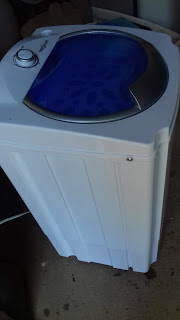 It's a cute little machine and perfect for my needs. 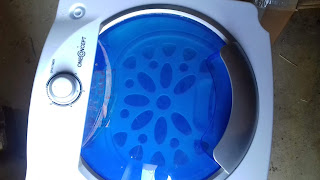 At the weekend I was given a lovely surprise. T made me a wrap around desk. It's a super corner to sit and work and yesterday I actually got all my accounts up to date. I have three ledgers, one for our overall business expenses, one dedicated to house costs and finally one for the wool and soap business. I'm not sure how the French tax system works, but at least I'll have all of our information easily to hand. 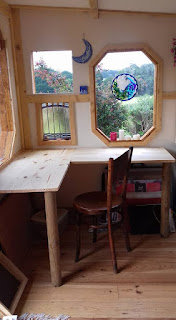 Before I get stuck into (litereally) the wool, I'm going to plan our menu and budget for this week. I really do love sitting in this space while thinking and planning :D
Posted by Yarrow at 02:34 5 comments:

I've been absent from my blog for a little while but I'm forcing myself to sit down and write.
I suppose you could say that I ran out of words. My head was so tired that thinking was almost painful. I've needed a little time to retreat into myself and sort out my head.
I've put myself under such a lot of pressure lately, cleaning the never ending messy house, trying to learn French, sorting the animals, moving into the Studio and all while dealing with more than a dozen dirty fleeces. I guess a little breakdown was inevitable!!!

I was getting worn out and my neck seized up, forcing me to book an appointment for a massage. I had a Reiki session at the same time and it ended with me in floods of tears. It was a great release and I realised that I felt like I was carrying the world on my shoulders. I had to start saying no to people. Slowly now I'm beginning to get back to normal, but I still have a little anxiety in the back of my mind about the jobs that still need to be done. I have seedlings growing out of their pots and an army of slugs waiting for me to plant up the veg beds!!! Some of my courgettes have already fed a good many slugs, but when the rain stops, I'll get my revenge!

The Studio was finished last week and I spent a lot of time painting the walls and ceiling, which only made my bad neck worse! It was lovely to see it finished though! 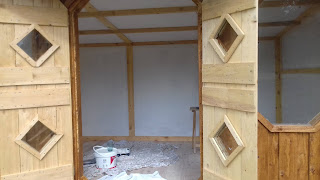 The dresser that was left behind was given a facelift with a pot of home made chalk paint. 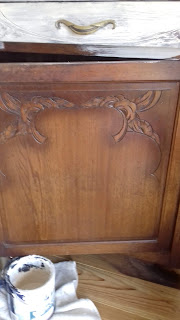 I love it now and want to get another one for the kitchen but T isn't so sure! 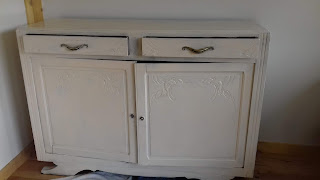 I love my Studio, it's such a calm and peaceful place to sit and work. I've managed to do so much spinning and knitting :D 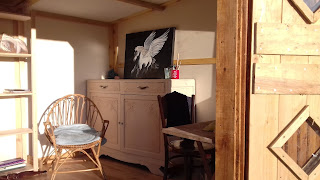 The cats are beginning to visit the Studio, but Piper claimed her spot as soon as the mats were down! 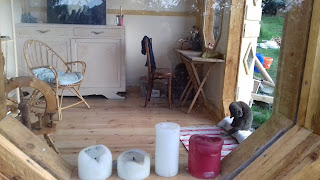 The outside has been tidied and landscaped by my lovely son and soon I hope to have wildflowers growing all along the front and roses at the side.
I'm taking it easy today, just a little spinning and reading :D
Posted by Yarrow at 02:26 3 comments: