A few days off.

I switched my laptop off a couple of days ago because I realised that there was just too much drama coming at me from the internet. I wanted the mental quiet of just living in the moment. It's helped a lot and now I'm back but eager for another break.

The politics of our world and how it's turning friends against each other is just out of control. I lost a friendship of over 9 years because this person felt that her way was better than mine and that I was a cruel individual because I wouldn't adopt her lifestyle. She had been reading far too much by an online person of propaganda and instead of doing the research, she just reproduced his speeches parrot fashion! That was two years ago and it still smarts that people can be led so easily with a few fake photos and some strong, cleverly written phrases. I don't miss the friend, she was hard work!

This wasn't intended to be a rant, but instead a comment as to why I feel better taking a step back!

I've begun painting again and I'm loving it. I need to get back to being the authentic me that's gone missing lately. Dexter thought he would give me a hand and I shared the picture on FB and someone on my friends list contacted me. 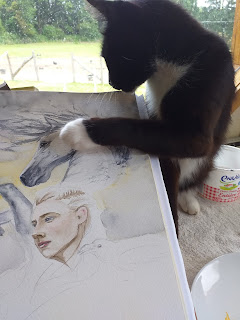 It would seem that there are two Dexters, almost identical in appearance, but not quite in nature! 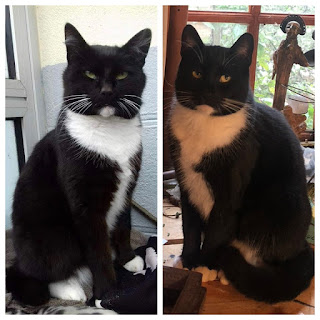 Our French Dexter is on the left and is so sweet and cuddly, English Dexter on the right is a bit of a pickle and only loves his mum when she's feeding him!!! Both are rescues! They now have their own Instagram account called dexterdeux :D

Merlin dog has settled so quickly and some of his fur is even growing back around his eyes. He's a happy, delightful little dog even though certain things trigger panic attacks and we're very careful to keep the atmosphere nice and calm. Not that he's calm, he skips around like a Tazmanian Devil, literally spinning on the spot, haha :D 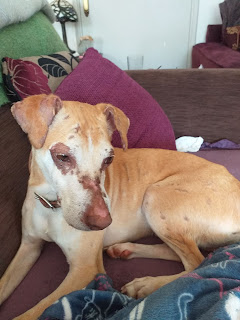