So here I am, in bed with a big fat foot! I thought I may have twisted it while gardening yesterday but the Dr I saw today thinks it's from an insect bite! There is no evidence of a bite, but the foot is very hot. I still think it's something linked to the fibro and overdoing things, but I'll probably never find out for sure! I'm just lucky that I already had the appointment booked to discuss general meds etc...

I'm a bit peeved that I can't spin, especially as I've been playing with dyes over the weekend.

This was another batch of avocado. I thought it was too pale, so I threw in some onion skin juice and a couple of tablespoons of henna indigo! 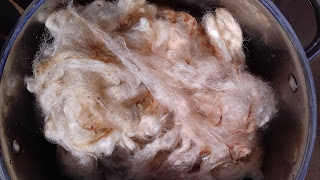 This was the result and I really liked it, only the indigo faded as it dried leaving a mostly brown wool :( 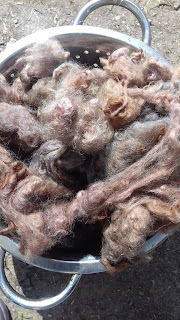 The was the same indigo, minus the onion skins, on some Southdowns fleece. Again the indigo faded, so another disappointment. 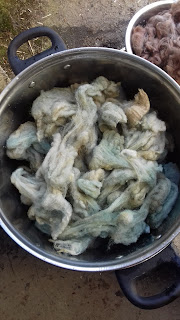 I finally made the indigo into a paste (as if for dyeing hair) and used it on some of the Angora goat wool. I noticed that the part of the pot in contact with the sun was turning purple so I put the angora into a large coffee jar and had a go at solar dyeing. It was a nice surprise and I like the effect. The colour hasn't faded either!
I'll share that picture later. For now I'm going to have a snooze as the tablets have made me sleepy and my foot is throbbing.
Posted by Yarrow at 05:14