I just have to share a picture of my little Taliesin, he's my Moonheart and means the world to us all <3 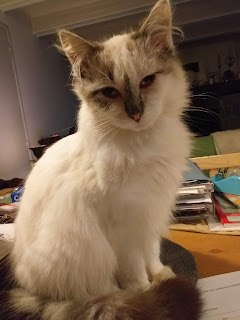 It's been a week of animal antics here at Wildewood. The winter has been brutal with constant rain, gailforce winds and an ever growing sea of mud. The horses have honestly had enough (so have the rest of us) and I had to take drastic action or risk losing one or more of them. Does that sound dramatic? Not really when you consider their poor feet are constantly soaking in mud and water and there's an old saying 'no foot no 'oss'!!!

I've written to so many neighbours and begged people in the village but they just don't want to get involved. Maybe they think their paddocks will end up as boggy as ours! One close neighbour stepped in and we used her field for a few months, but we also have the hay she cuts, so we didn't want to ruin the pasture. Finally, an english friend found us the perfect solution. A very rough overgrown piece of land that we can use in return for clearing it and making it good again!
Yesterday was moving day and Bo was first in. 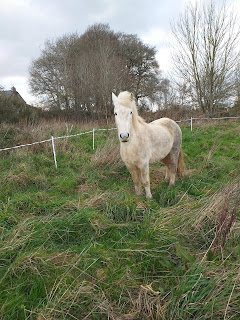 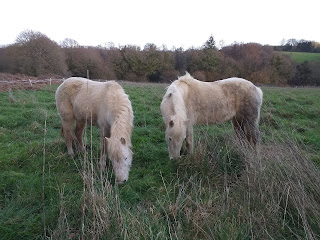 Benson and Maggie arrived next and Bo had to remind them that he's still the boss!!! 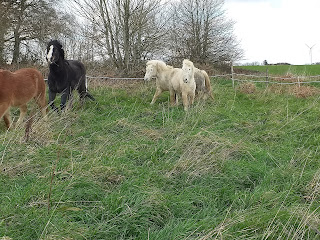 Jerry and Flash were the third group followed by Toffee (center) who came along with the water trough and spare fence posts. He was not happy to be last at our field and cried pitifully! Jerry let out a neigh of pure joy when Toffee finally arrived and the three amigos were reunited :D (or three stooges!!!) 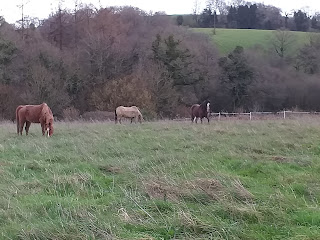 Benson is another oldie who looked instantly revived by the gorgeous grass. We have to monitor him though as he does get laminitis! Honestly, sometimes I just can't win! 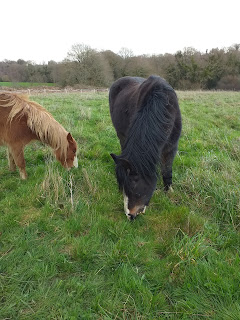 We got home quite late and of course in Panic Merlin dog had left little pee presents in the kitchen! After cleaning that up  I had a shower and was ready to collapse into the freshly made bed, but my dear man had made pie and chips for supper. To be honest, I was so tired, I barely remember eating it!!!
Posted by Yarrow at 04:11 5 comments: