All the cats have now had their rabies vaccines, been weighed and given a clear bill of health, but here's the kicker! Do you remember a few weeks ago when I was so worried about Finn's weight? Well, he's the heaviest of them all! Gigi is next heaviest, which is funny as she's almost the smallest (Bambam and Cotton weigh the same, which is tiny).  The dog was the worst for his shots and cried like a girl as he hid behind my legs! Tomorrow it's the turn of BF's dogs, sheesh!

The house drama continues and I can't even talk about it! 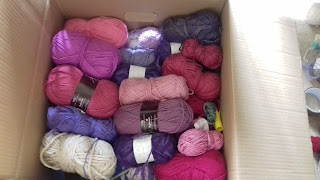 Today I packed up the large wool cupboard.  The balls are arranged by colour. Box one is white, blue, purple and pink. Box two, reds, browns, golds and all the rest! You would think that seeing all this wool would give me a sense of perspective, but no! I was thinking about how many lovely wools I should double up on, just in case! I must stay away from the wool shop!

I lost myself tonight in The Handmaid's Tale and Poldark. The first was quite moving and the second a bit too political. Both needed women to give the men a good kicking in the tenders!!!

Tomorrow, I have lots of forms to fill in. They say that moving house is as stressful as divorce. I would argue that case but I'm not sure in which direction! Both induce insanity!!!