Where has the time gone? I can't say I'm sorry to see the back of January for so many reasons! Only 2 more days and hopefully they'll be kind ones.

The weather has been so mild and I foolishly put up a youtube about how wonderful it's all been and a couple of weeks later the cold hit us. The really bad weather just happened to hit on the day we ran out of oil, so an early fire was lit and the oil man came out to top up the tank. I love the services here, people work hard and we've rarely had any problems at all with poor quality, although I've heard of those who have been kept waiting for builders and roofers. Our oilman could probably be classed as one of our emergency services and he acts that way too!

So for many reasons, I decided to tackle Veganuary. I've bashed vegans many times for their closed minded attitudes to animal farming and although I agree with them on so many points regarding poor farming practices, I can't agree with their forceful attitude that everyone who eats meat is wrong. We all eat too much meat and modern farming is in so many ways a broken system that sereiously needs an overhaul. I struggle with how the animal is treated at the abbatoir, that system needs the biggest adjustment. You can give an animal a very decent life, but if at the last it's a horror show, then I would rather not eat meat.

That was one reason that led me to Veganuary, the thought of animals at their last moments, but also I've been having terrible digestive issues due to the FM and the drugs I take. I did a little research, ordered some supplements and grains online and off I went.

Luckily, we still had plenty of fresh salads and a few veggies in the veg garden. Even looking a bit wilted the lettuces were great. 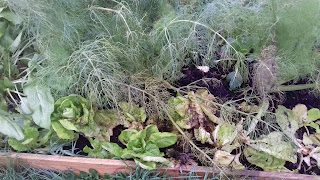 A typical lunch was a wrap filled with houmous and salad. I made different types of houmous and a few bean pastes, but the traditional chickpea is still my favourite. I also sprouted a lot of seeds for lunches and garnishes to add extra proten. 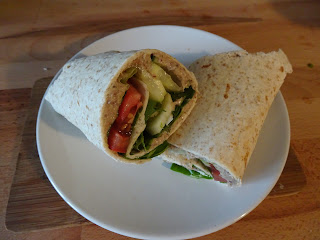 Evening meals were easy as I've always eaten a lot of plant based foods, so I just had to remove any cheese or eggs. I already have soya milk, so sauces were dairy free and I figured out a white sauce using oil and flour to make the roux, it was a bit bland so I added lots of herbs. I'm not sure why I didn't take any pictures, but I made bean burgers, vegetable chilli, puy lentil moussaka, sweet potato curry and lots of pasta dishes with garlic and olive oil.

It was great until after about 10days when the headaches started. I just felt sick and hungover until I'd had some breakfast and then the pains would go for an hour or so only to come back mid-morning. I discovered that I was probably not eating enough calories, so I made some date and nut truffles and included a spoonful of peanut butter with my breakfast cereal. I should have made some biscuits or granola, but I honestly didn't have the time on top of the winter feed routine. I did manage to keep up with the bread making and that helped a lot to stave off the hunger pains. However, I began waking up in the early hours absolutely starving and unable to get back to sleep. This impacted on the FM and I just felt thoroughly rotten. I began dreaming of eggs!!! By the second weekend, I just had to have some eggs on toast. I was disappointed with myself but the headaches began to ease and this enabled me to carry on for another week after which I once again had eggs as a treat. After all, our hens are well loved and cared for and one of the Vegan issues is to do with the exploitation of animals, which just doesn't happen in our little farm.

So was the experiment a failure or success? Well, it helped me to deal with my issues regarding animals and how they're farmed, it showed me some huge issues with my diet and digestion and the outcome is that I'm eating far more vegetables etc.. I only intend to eat meat that has been ethically produced. We have a friend nearby who grows their own meat for the table and who slaughters their animals humanely in a barn behind the house. No stress at all for the animals and a product that I'm happy to eat.