We don't need a strimmer!

The weather has been glorious this weekend and the ponies have had lots of time in the garden eating down the grass, which of course means that we don't have to cut it. I'm not sure how long it will take for the paddocks to recover, but we've planted the seed and just have to wait.
Toffee rolled a lot :D 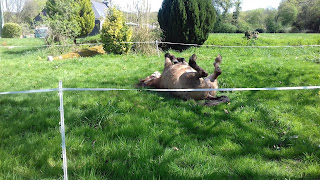 Bo and Merlin have come through the winter really well, I guess that's their tough Scottish genes showing through. They did drop some weight, but as you can see, they're still little porky dumplings :D I've put them on  the grass to just to keep them happy as it's grim out in the paddok! 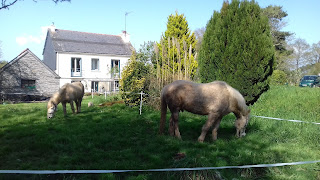 Benson and Flash have done well too, despite Benson being 19! But then, he's a tough New Forest boy like Toffee. Flash is Welsh and young, so he only dropped a little weight. The ones that really struggled were Maggie and Jerry. Not only does Jerry have his age against him (21) he's also an Anglo arab, so needs a lot of extra attention. Maggie is also Welsh, but not as tough as Flash, I suppose. 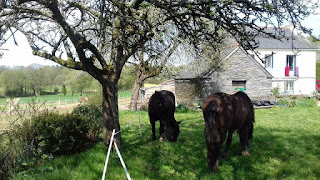 Merlin had a bath yesterday which took him from a dark sludge colour to antique white! He didn't mind too much considering his last bath was a couple of years ago! We then took him for a walk and introduced him to our lovely neighbour Monsieur Prospero. Merlin neighed in his face and pooped outside his door, honestly the manners of that boy!!! M.Prospero just laughed and asked if he could have the poo for his garden, Bien sur! I didn't want to walk all the way back with my shovel, haha :D 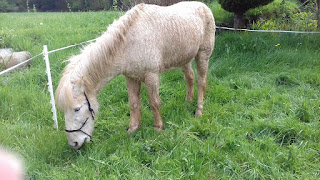 Finn took a restful approach to the weekend. He was just out of reach of the ponies, unless they tried hard to get him. The only one I mistrust with the cats is Bo, it's his one failing that he dislikes little animals! 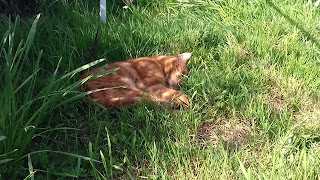